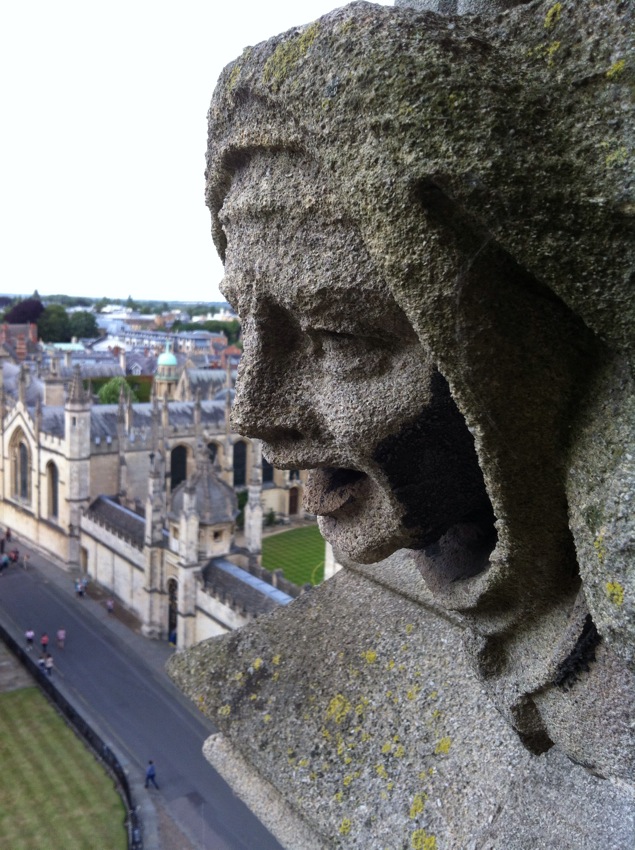 Well, of course I woke up happy, my adventure continues. Tho in my excitement I actually forgot the Addendum and had to return to my room (it was a fast elevator ride). 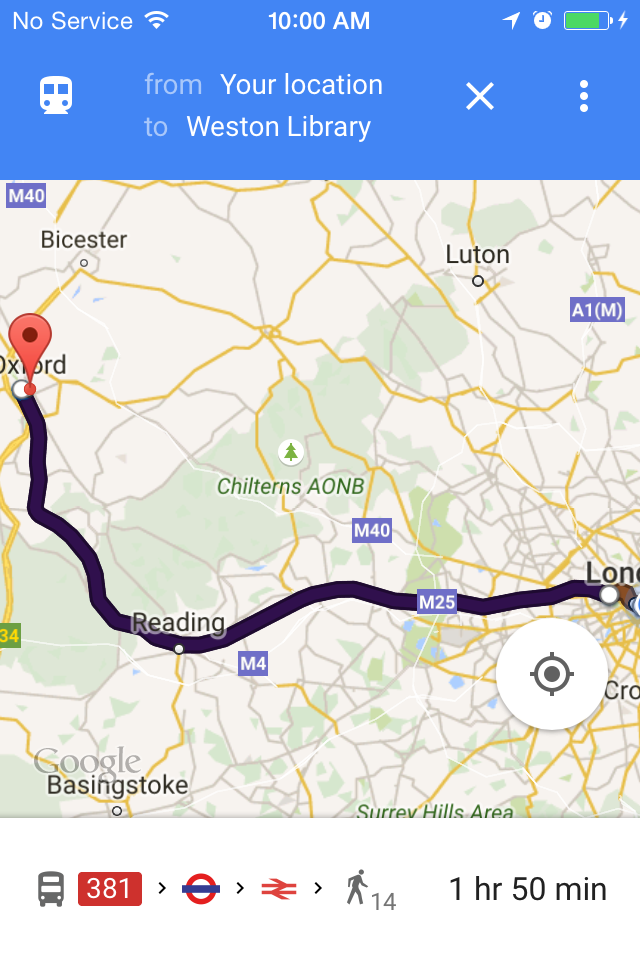 But I made it to Oxford, and found the newly opened and gorgeous Weston library – part of the Bodleian library. 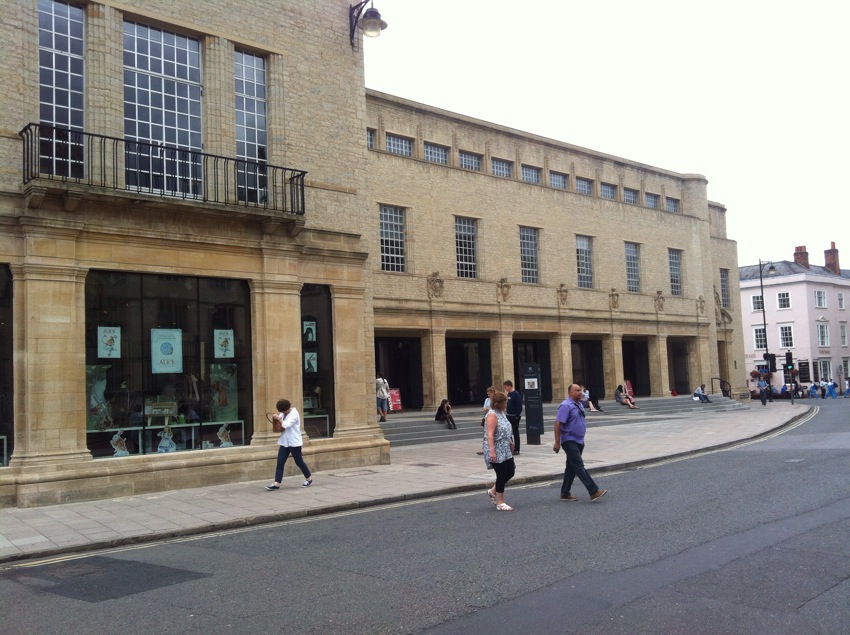 Before my appointment, I saw some gargoyles, visited the temporary show “Genius”, and then met up with the charming Alan Coates. 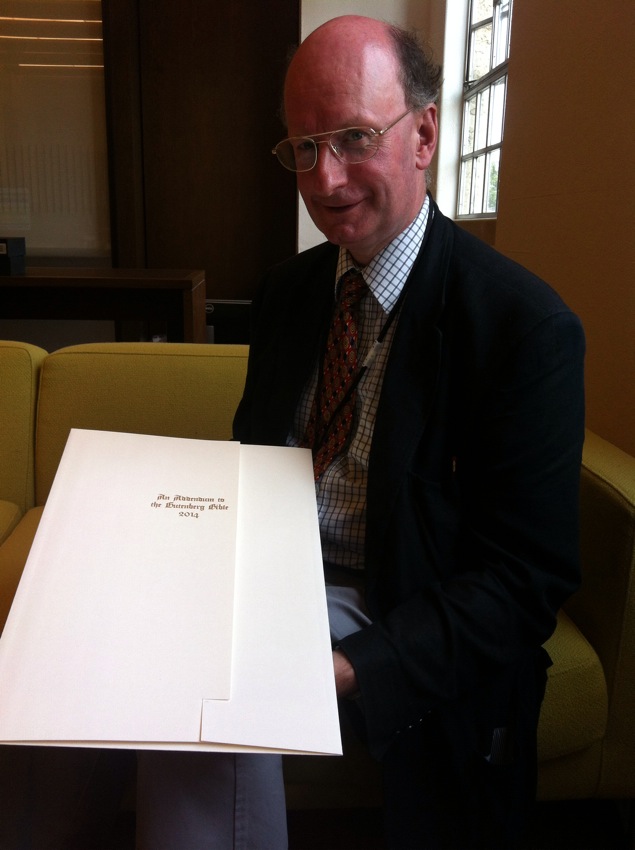 He said one of the interesting things about their Gutenberg (Hubay #24) is its history of owners. They are not clear on all of them, but they bought it for £100 in  1793- likely as French Revolution authorities seized objects from aristocrats and disposed of them.  While in France it was re-bound from the traditional wood panels to gold tooled green morocco (goat skin).  By that time it had become an object. Previously it was owned by a count in Sweden.  And perhaps acquired from a German monastery during the Thirty Years War. 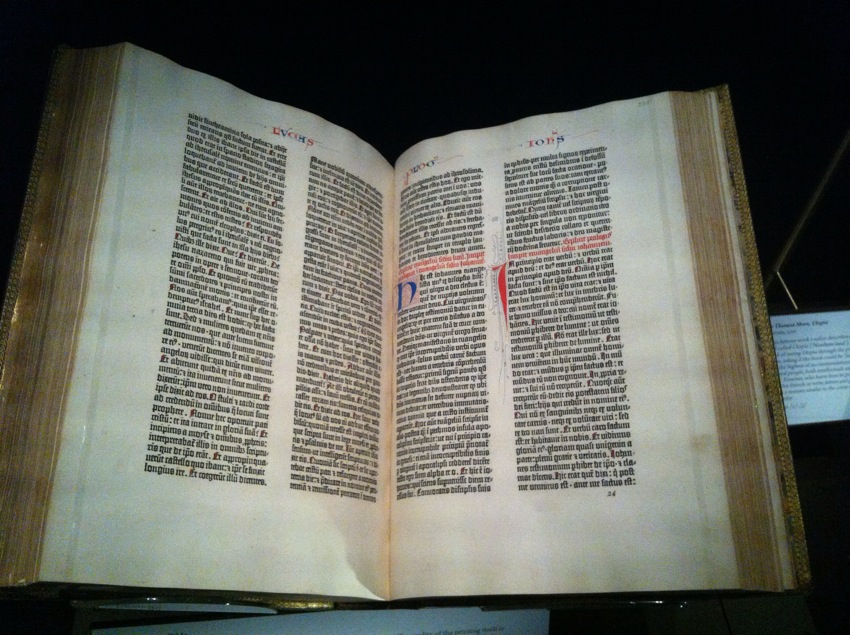 In the Genius exhibit, the Gutenberg was displayed next to an advertisement – one of Alan’s favorites. 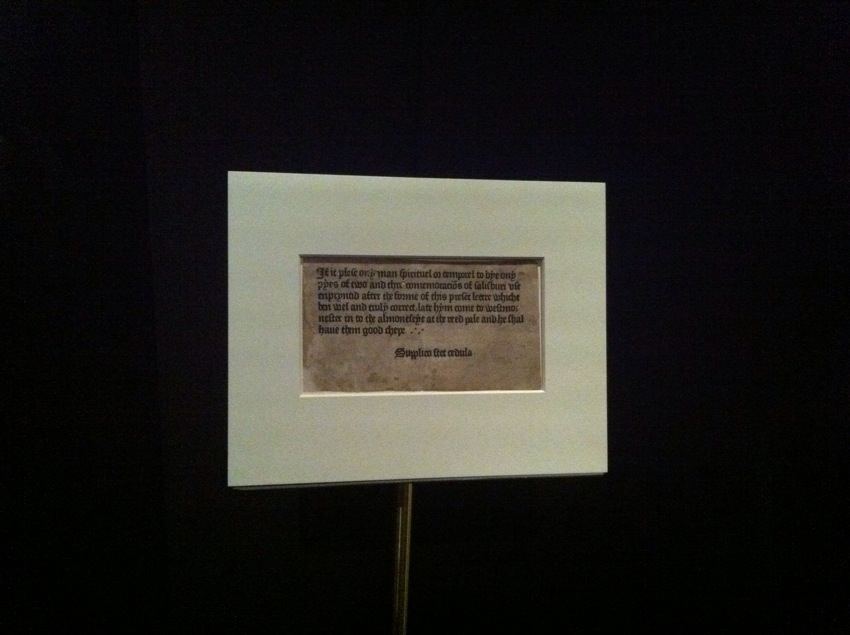 When I asked why an advert by the publisher William Caxton was a favorite, he said with a smile, the advertisement remains, the book being advertised is lost forever (not exactly, apparently a fragment of the book -6 leaves- survives at the British Library).

These librarians have the best sense of humor and appreciation of the facts –in context! 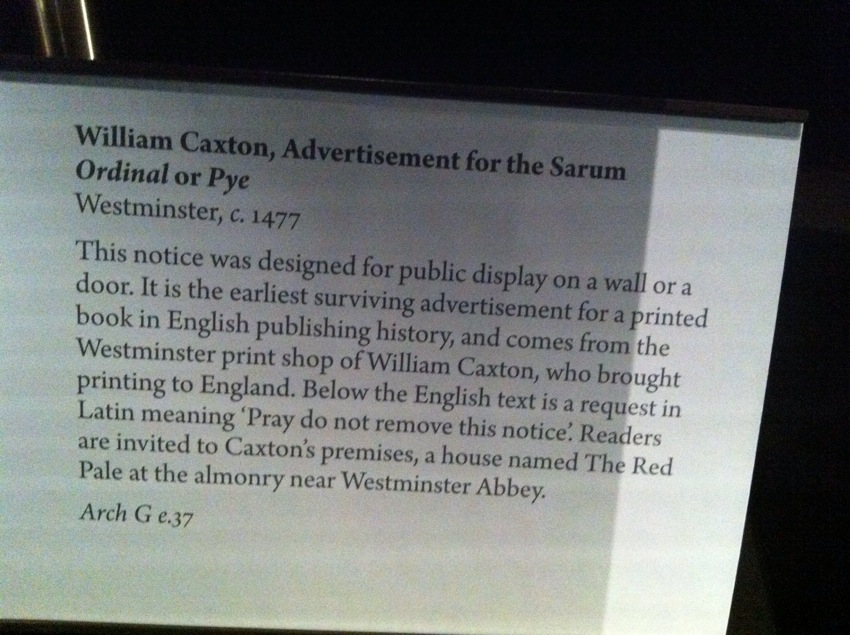 To note, the advertisement placed on a door (the first known ephemera of advertising in publishing -an odd kind of redundancy when you think about it) politely asks “Pray do not remove this notice”.  Indeed, Mr. Caxton, indeed.

Another favorite on view was Pliny’s natural history. 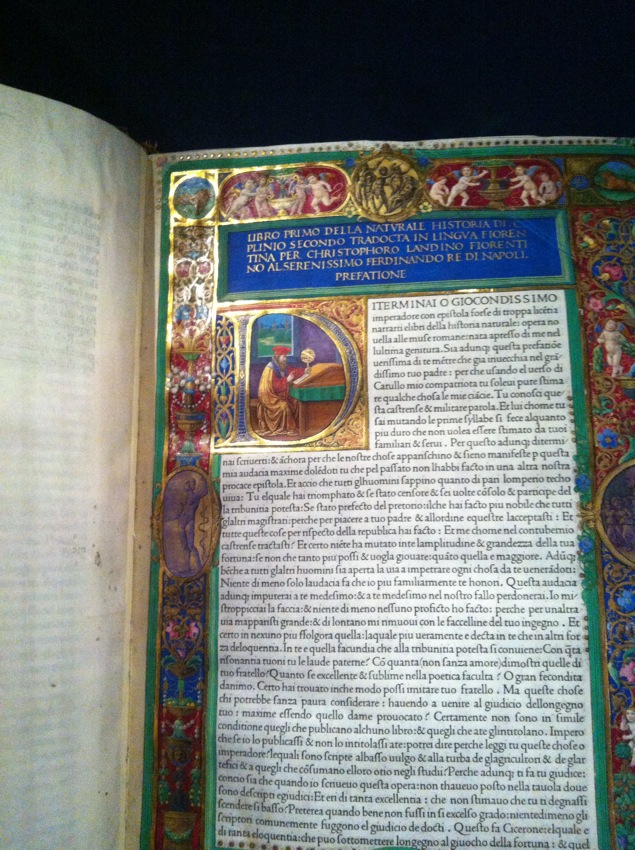 Besides being a “Nicolaus Jenson printing… sumptuous… parchment… elaborately beautiful binding (which sadly you cannot see)” it had these Historiated Initials. Inside the first letter of each chapter was a pictorial abstract of contents of that chapter.

Inside the D of this first chapter is Pliny as a scholarly scientist. Other chapters illustrate things like bee keeping, trees, dolphins, countries! How I long to see the illustrated bee keeping! 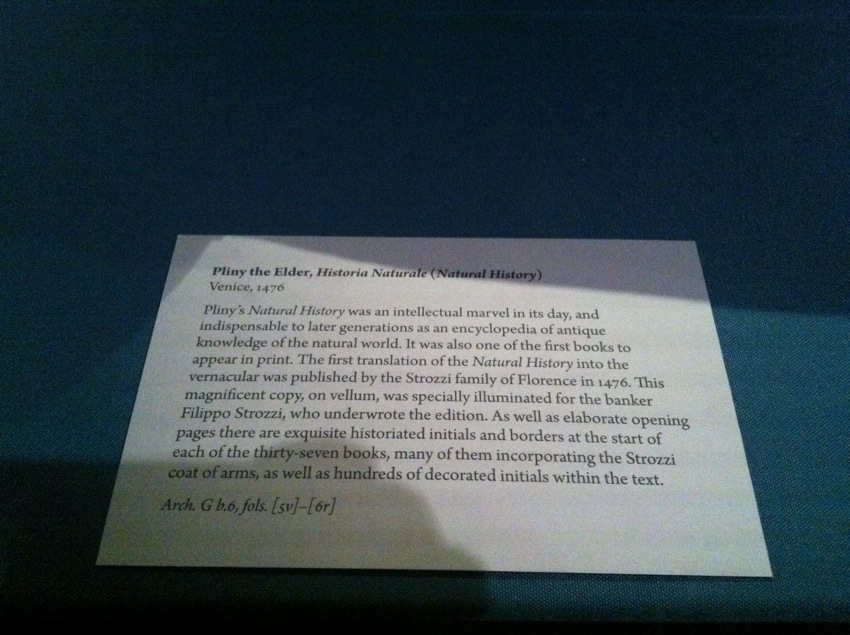 These books were underwritten by a banker, Filippo Strozzi, in 1476 and as such at the bottom are lambs from the Strozzi family emblem and a portrait of Strozzi and his son (bottom right). 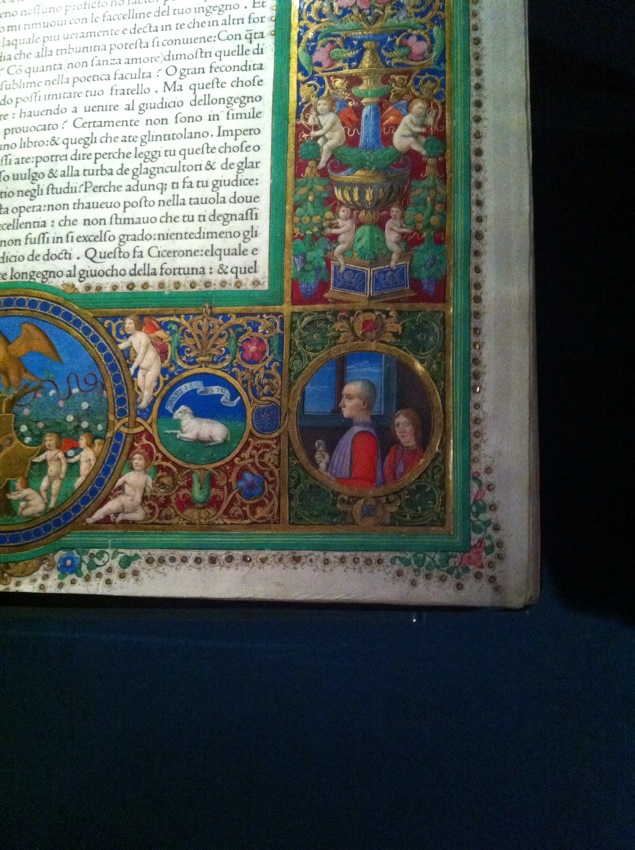 Someone else must review the donation and Alan will let me know if they officially accept Addendum, Edition 26 (they did! letter will be in my mailbox upon my return).

In the meantime, I will savor the idea framed by this new architecture– colorful book covers catalogued as wall tapestry that are animated by readers that interrupt their seemingly static order. And yet, they ripple with thought, waiting for fingers and eyes. 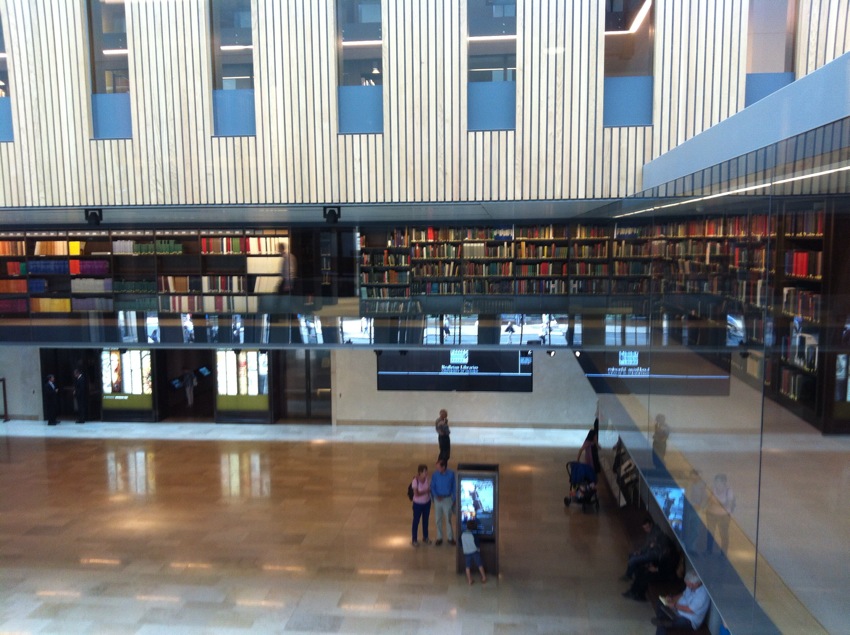